There are two types of engines that use timing belts.  They are described as: "Interference Engines" and "Non-interference Engines"  The difference lies in the proximity between the valves and the pistons.  On an interference engine, if the timing belt slips even one notch, the piston can crash into an open valve causing serious engine damage by bending valves and breaking pistons.  Non-interference engines will usually not self destruct, but in either case if the belt fails, the engine will immediately shut down leaving you stranded.

The most common timing belt symptoms are engine died while driving and will not start or engine just gives one hard click. The guide will tell you which category your engine falls under. 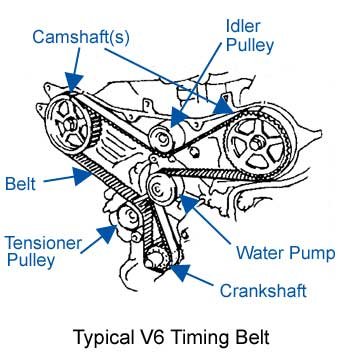 Regardless of whether or not you decide to have a timing belt replacement performed, you would be wise to check it periodically to make sure it has not become damaged or worn. Generally speaking, a severely worn belt may cause engine performance to drop dramatically, but a damaged belt (which could give out suddenly) may not give as much warning. In general, any time the engine timing cover(s) is (are) removed, you should inspect the belt for premature parting, severe cracks or missing teeth. Also, an access plug is provided in the upper portion of the timing cover so that camshaft timing can be checked without cover removal. If timing is found to be off, cover removal and further belt inspection or replacement is necessary. You will want to make sure the timing belt pulley is in good shape as well. The timing belt replacement cost is cheap compared to a new engine.

Your vehicle owner's manual will recommend at what mileage the timing belt must be replaced.  These intervals range from every 60,000 miles to every 105,000 miles.  To see what is recommended for your engine, click on the link at the bottom of this Page.

If your Timing belt is cracked, worn or has chunks missing, it needs replacement. 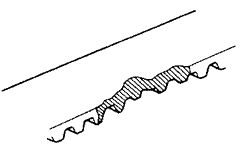 Timing belts fail without warning and on some vehicles, are almost as hard to check as they are to change.  In most cases, your only protection is to change the belt at the recommended intervals. Timing belt replacement is not a cheap job but it is far less costly than the alternative. Timing Belt Replacement Interval Guide. By Gates®