Your car's Alternator is just as important as your Battery.

Here we will try is explain in detail how to properly check and test your car's Alternator. We will also explain how diagnose if your alternator is failing or if it is just not receiving the correct voltage to do it job. If would like a wiring diagram or replacement procedures specific to your car that you can view right now over the internet, Start Here.

Alternator : An alternator is an electromechanical device that converts mechanical energy to alternating current electrical energy. Most alternators use a rotating magnetic field but linear alternators are occasionally used. In principle, any AC generator can be called an alternator, but usually the word refers to small rotating machines driven by automotive and other internal combustion engines. Resource : https://en.wikipedia.org/wiki/Alternator

Basically this means that an alternator is what charges the car's battery and also provides power to operate the engines computer, lights, radio, etc. So, if the alternator quits functioning then all of these electrical devices will try to run off the car's battery. The problem with that is, once the battery starts to loose power ( since it is no longer being recharged ) the car will start to function poorly and will eventually stop running altogether. Generally when the alternator starts to fail a Battery light will illuminate on the dash board. This means the battery is no longer being charged , this does not mean the battery has a problem.

How to Test Your Alternator

Testing : Using a multi-meter set to DC volts, connect the positive and negative leads to the same on the battery with the car's engine running. You should see from 13.2 - 14.7 volts. If you see less than this and confirm it is the same when the engine is running or not, then you know the alternator is not charging. 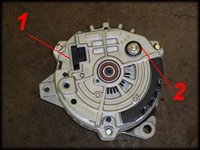 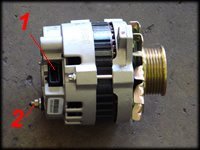 Here you can see a nice side view of the alternator and the connections. #2 has a retaining nut that needs to be removed before the battery wire can be connected or removed. #1 plug has a tab that needs to be lifted to remove connector.