Knowing how a car engine cooling system works can save you money.

The most common reason for your vehicle to overheat is lack of or being low on coolant. If the engine is low on coolant (check the radiator and overflow tank) then you need to perform a pressure test on the cooling system to determine where the leak is coming from so that you can fix it.

Like the thermostat, the cooling fan has to be controlled so that it allows the engine to maintain a constant temperature.

Front-wheel drive cars have electric fans because the engine is usually mounted transversely, meaning the output of the engine points toward the side of the car. If the car is equiped with air conditioning it may have two fans.The fans are controlled either with a thermostatic switch or by the engine computer, and they turn on when the temperature of the coolant goes above a set point. They turn back off when the temperature drops below that point. Many of the electric fans also have a cooling fan relay so if you are diagnosing an overheating issue, be sure to the relay also. You can get a cooling fan wiring diagram from this site. 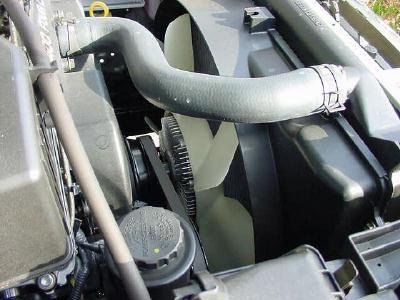 Rear-wheel drive cars with front to back mounted engines usually have engine-driven cooling fans. These fans have a thermostatically controlled viscous clutch, know as a clutch fan. This clutch is positioned at the hub of the fan, in the airflow coming through the radiator.