The thermostat's main job is to allow the engine to heat up quickly, and then to keep the engine at a constant predetermined operating temperature.

It does this by regulating the amount of water that goes through the radiator. At low temperatures, the outlet to the radiator is completely blocked -- all of the coolant is circulated back through the engine. until the thermostat reaches its pre-set temperature and begins to open.

There is a chart below to help you understand how a thermostat works. 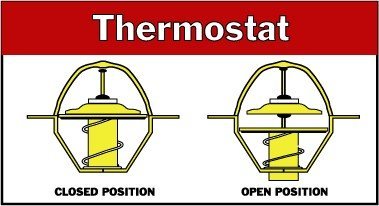 The open and closed positions of a thermostat

If you ever have the chance to test one, a thermostat is cool watch because what it does seems impossible. You can put one in a cup and heat it in the microwave. As it heats up, its valve opens about an inch. If you'd like to try this yourself, go to a car parts store and buy one for a couple of bucks.

The secret of the thermostat lies in the small cylinder located on the engine-side of the device. This cylinder is filled with a wax that begins to melt at around 180 F (different thermostats open at different temperatures, but 180 F is a common one). A rod connected to the valve presses into this wax. When the wax melts, it expands significantly, pushing the rod out of the cylinder and opening the valve.The wax just expands a good bit more because it is changing from a solid to a liquid in addition to expanding from the heat.

This same technique is used in automatic openers for greenhouse vents and skylights. In these devices, the wax melts at a lower temperature. 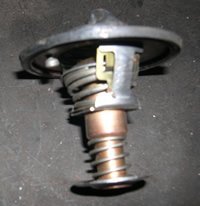 This is an example of what an actual thermostat looks like.