Switches are used in electrical circuits to control the passage of current. The most common use is to open and close circuits between the battery and the various electric devices in the system. Switches are rated according to the amount of amperage they can handle. If a sufficient amperage rated switch is not used in a circuit, the switch could overload and cause damage. 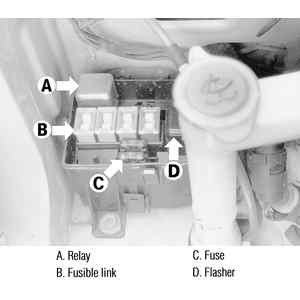 Some electrical components which require a large amount of current to operate use a special switch called a relay. Since these circuits carry a large amount of current, the thickness of the wire in the circuit is also greater. If this large wire were connected from the load to the control switch, the switch would have to carry the high amperage load and the fairing or dash would be twice as large to accommodate the increased size of the wiring harness. To prevent these problems, a relay is used.

Relays are composed of a coil and a set of contacts. When the coil has a current passed though it, a magnetic field is formed and this field causes the contacts to move together, completing the circuit. Most relays are normally open, preventing current from passing through the circuit, but they can take any electrical form depending on the job they are intended to do. Relays can be considered "remote control switches." They allow a smaller current to operate devices that require higher amperages. When a small current operates the coil, a larger current is allowed to pass by the contacts. Some common circuits which may use relays are the horn, headlights, starter, electric fuel pump and other high draw circuits.